Eye Color: Silver
Hair: Black, long hair that flows down his shoulders.
Height; 6ft5in.
Mass: 121kg.
Attire: From his shoulders trailed ghastly chains and linked skulls; his entire attire comprises of bent skulls and linked chains that curves around his ribs while leaving his belly bare. His arms aren't human-like as crawling dark veins scales over his arms with the fists and wrists surrounded with jagged spikes of foreign substance. 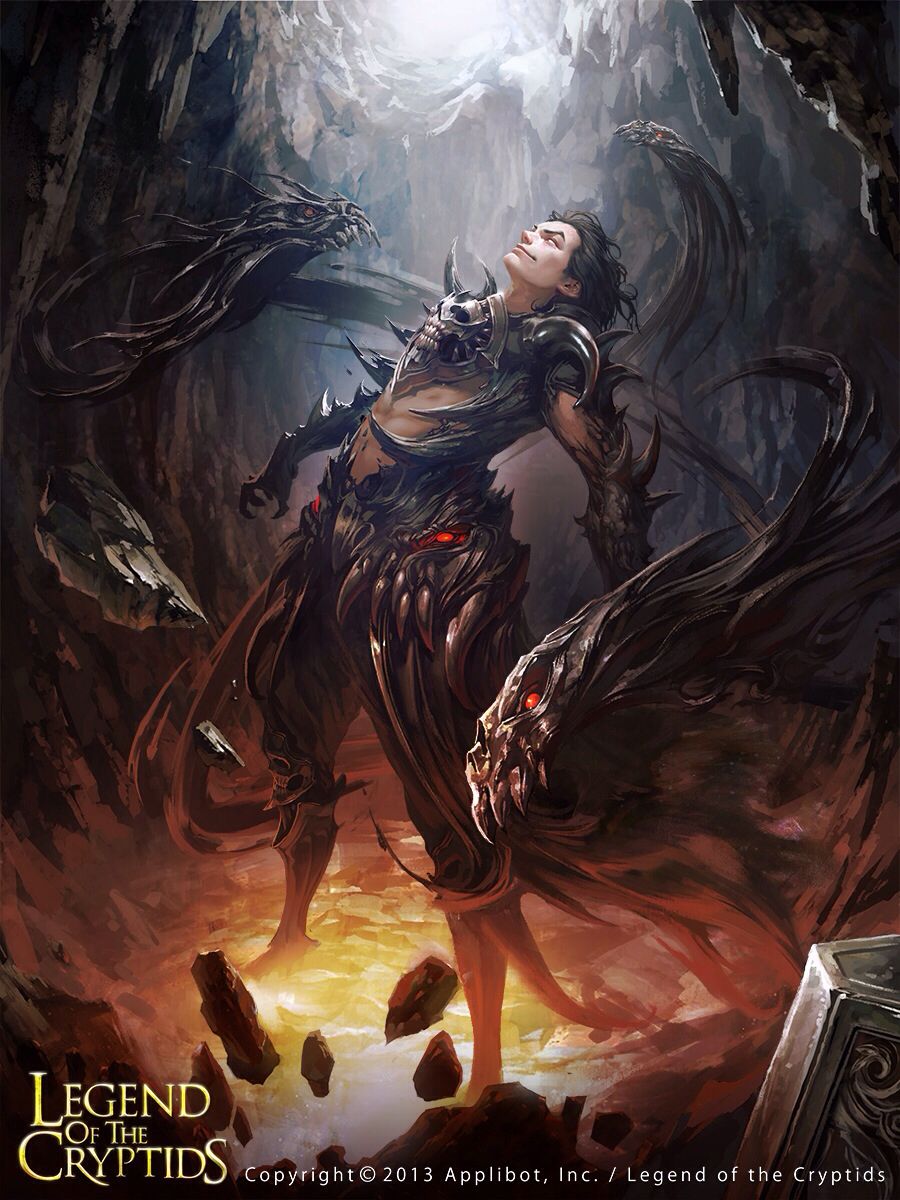 Color; Miasma Black
Attribute; Seke's reiatsu shape is massively tangible and curls around him in at all times except retracted into his special attire. His shape comes off as three floating ghouls with radiant red eyes.

Personality;Seke's personality is outrightly rude, lawless, arrogant and wrathful. He pays no respect to no one except the demon god regardless of rank and tend to distaste being given orders by anyone that isn't Demon God. His voice possesses a matter-of-fact tone rich in prideful and arrogant comments. Seke, however, is a man that, once he acknowledges them, shows quite the respect they deserve. . . Indeed, he'd never turn down a fight, and would smile maniacally at odd and unusual intervals. He believes firmly in his capabilities and would challenge anyone despite differences in strength. He prides in his victories and often indulges in tricks and wits to overcome any challenge that may persist. Though he's quite tolerant and would laugh off a few times, it's been said many a times to not push one's luck and invoke Seke's Wrath; his title as Wrath isn't for jokes- past demon kings revered his might on several occasions when he's wrathful. It has also become a habit to name any move he displays on a whim.

DIABLO
A spawned consciousness from Seke moves around him at all times much like the rest. It signifies Seke's wrath as it'd almost aggressively charge at anything/anyone that disrespects Seke or harbour malicious intent. It's strong, resilient and fast

ECSTANZO
Signifying Seke's vast pride and arrogance, it only access the importance of things by how much reiatsu they hold. While those that can surpress their reiatsu can fool it, it still retains certain senses that allows for communication.

MARCO
Marco is absurdly subservient compared to the rest, it takes instructions and aid by spewing forth flames and shoot beams.
Last edited by PhoenixDayne on Sat Jan 25, 2020 12:32 pm, edited 1 time in total. word count: 443
Akutagawa Atsushi
Spirited away, One strides on the axis of death and alongside despair. Knowledge isn't finite, Our limit is Us.
Top


Last edited by PhoenixDayne on Tue Feb 11, 2020 4:21 am, edited 3 times in total. word count: 768
Akutagawa Atsushi
Spirited away, One strides on the axis of death and alongside despair. Knowledge isn't finite, Our limit is Us.
Top

Togabito Skill; Demonic Echo.
Name; Netherworld & Cecid.
Element(s); Dark/black & Energy Manipulation.
Insight; Seke can create and manipulate energy at all planes and levels of existence. As the ruler of netherworld, Dark becomes his primary ability, giving him a vast array of ideas to utilize Cecid.


Ability Name; Cecid Excitation.
Element(s); Energy Manipulation.
Type; Active; Physical Effect.
Description; Seke can multiply the impact/effect of his physical based attacks by forcefully exciting atoms around his body which commonly leads to explosions or sometimes, knock aback the target(the knockback or explosive effect can drastically increase if the opponent was caught with this attack during motion). Seke doesn't suffer from the effect of the explosions or the knockback.
Sub-effect; This necessarily doesn't mean it can not be used in a non-physical way. It'd forcefully explode these excited atoms around opponent(s) that aren't far off by anything more than 50metres, however, impact and all notable effects of an explosion is kept at the level of Seke's highest "castable" hellflames and would cost just as much reiatsu as the hellflame counterpart.
Physical Alterations;
Limitations;
1• Seke suffers just about the same damage he's dealt.
2• The multiplication cannot go higher than 3×.
3• 2× deducts about 3% of Seke's reiatsu.
4• 3× deducts 6% of Seke's reiatsu.

Ability Name;Negative Exceed.
Element; Energy Manipulation.
Type; Active.
Command; Unknown (Not Needed).
Description; Seke is able to release a great amount of cold energy, which embrittles and freezes over things along a path, leaving behind spikes and dangerous shards, capable of skewering anything.
Upon activation of this ability, Seke's body become quite pale as everything around him becomes frozen and misty, turning whatever he touches into another block of ice from inside out. This is because he always release cold energy when he activates this technique.
Sub-effect; Staying long in Seke's supposed "Frozen World" causes a very serious frostbite, where limbs break apart as if they were made of ice, living bodies become as pale as corpse's due to limited blood circulation and a dysfunctional temperature regulation in one's body. However, Seke can plummet the temperature of his "Frozen World" or rather the cold energy he's releasing to an absolute zero where even atoms aren't moving, bringing almost everything moving to a complete halt. Every skill he or his minions utilizes comes with a freezing effect, turning his hellflames into flames that freezes.
Limitations;
• Opponents(Roleplayers) and any of their attacks composed, amplified, coated or made of reiatsu aren't subjected to the effects of the absolute zero, however, if they do not fend off the cold, they might have a serious case of frostbite.
• -100°C drains 1.5% per post.
• -150°C drains 3% per post.
• -200°C drains 4.5% per post.
• -250°C drains 6% per post.
• Absolute Zero drains 7.5% per post.

Ability Name; Evolution Beyond.
Element(s) ; Dark & Energy.
Type; Active.
Description; Seke can produce and freely manipulate a special kind of energy that accelerates the negative and hostile growth of organisms. This energy excites cells into breaking themselves down and redevelop at blinding pace, giving birth to something distorted, twisted and different yet similar. This, not only physically evolve things in a negative way, but mentally as well, evolving the once mild hostile intent into an unquenchable hate, anger, hostile intent or anything negative at all. That said, even friends can turn foe
Side effects;
- Trees grow very thorny with sensitive vines and branches and become omnivorous. Domestic animals become larger and wilder, incapable of being tamed. Their forms are divorced from what they were but leaving behind the notable features that makes up their identity. Growing spiky and sharp durable furs(for animals with furs), extended fingertips and jagged teeth, capable of eating off metal.
- Good or non-malicious reasoning becomes impossible.
- When applied on oneself during any of those mentioned states above, there's a clear change in physique wanting to adopt the body of a vicious organism that can survive the cold or heat(though not previously affected by any change in temperature).
- When applied normally(not in any state or in tandem with an ability) on himself, Seke's changes are rather mild, not exceeding mere extension of spikes across skin and sudden protrusion of sharp and durable fingernails.
- Characters/creatures with slight alterations begin to battle their own body as limbs begin to act violently, attempting to tear its body apart.
- Can be used through his ranged attacks or any arsenal he possession.
True utility and sub-effect
Seke applies this ability in acceleratedly evolving the current specs and capabilities of his three minions that hover constantly about him. This gives them a more defined form similar to certain creatures(prehistoric, mythical).
•••Diablo;

Diablo's new nature comes as a result of how wrathful it is. Diablo gains sharp talons and the attribute to levitate/fly with the wings attached beside both arms. The tail whips about with enough force to shatter a boulder.
Diablo cannot exist beyond 15metres.

Ecstanzo still remains incapable of assaulting a target. However, its ability is amplified to sense malicious intent, reiatsu. It communicate both telepathically and verbally. Thanks to his inability to assault, it possesses an enormous range of 100m.

Marco is as subservient as ever and cannot exist beyond 5m. It can spew different flames with varying destructiveness from each head. First head can spit out a vortex/waves of flames, second can spit out bullets/explosive balls of flames and the last can spew out magma that hardens and restrains targets immediately.
Limitations
- Each evolution(of minions) takes 7% of his reiatsu and requires 1.5% of reiatsu to be sustained per post.
- Growth can be slowed by constantly channeling reiatsu to the point of contact to prevent accelerated spread.
word count: 988
Akutagawa Atsushi
Spirited away, One strides on the axis of death and alongside despair. Knowledge isn't finite, Our limit is Us.
Top
Post Reply
3 posts • Page 1 of 1

Return to “[Profiles] The Unholy Circles”